To read independently for enjoyment is perhaps one of the greatest pleasures of life and definitely one of the cornerstones of a good all-round education. Chapter books are a significant milestone in a child’s reading journey. They provide a vital transition point for a child progressing from sounding out words and articulating them with hesitation, to reading silently, independently and with finally with pleasure. 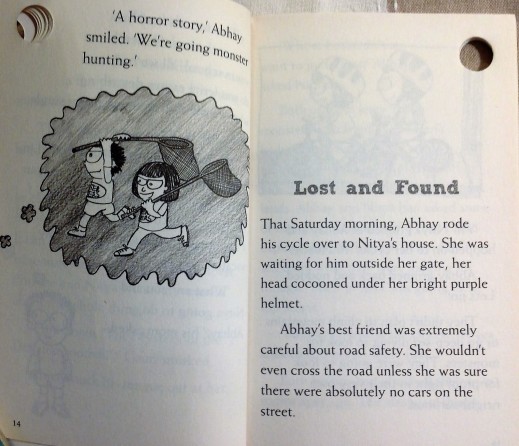 Large font, generous use of pictures, simple storylines, vocabulary that is mostly familiar but with enough new words to increase vocabulary and comprehension – all these  are features which make chapter books invaluable in encouraging independent reading.  Chapter books are of varying lengths. Around  60-120 pages is a good length to start with for new readers.

When to Introduce Chapter books:  The best time to introduce chapter books is when children are ready for stories which require a narration in several chapters.  The complexity of plot in such books makes it more suitable for chapters rather than a beginning-to-end telling as single story.  Readiness for chapter books also implies that the child will be able to recall the events of a chapter/chapters read the previous day and be ready to resume reading from that point.

Deciding when to introduce chapter books is much easier for parents, who have to cater to the needs of just their own children.  Introducing chapter books in the classroom is more challenging.  To begin with, the reading tastes and levels of students in a single class are as diverse as the children themselves.

Chapter Books in the Classroom: A great strategy that teachers can use to overcome this challenge, is to have a basket or shelf holding an assortment of carefully chosen chapter books that make up the Class Library. These books are kept in the classroom and children are encouraged to choose the books anytime they want. The books can be read during a period earmarked for reading activities or be taken home to read.

As in all things, letting the child have some control of what she or he reads is important.  Pressure in any form detracts from the enjoyment so teachers should try to create a relaxed atmosphere and not be critical of the number of books a child reads.   Its also a  good idea to make the process of  choosing and borrowing the books very simple in order to encourage spontaneous reading.

With a smaller selection of books, it’s easier for the teacher to pair the reading with interesting activities which can be completed singly, along with the parent at home or best of all, by a group of peers.

Since peer recommendations are a great way to get children to sample new books, it’s a good idea to have at least  2 or 3 copies of each title. Teachers could intersperse a few weeks of reading with an activity that creates excitement.   Classrooms could have display boards where children can share the funniest sentence they have read, or the best description of a scary moment, or the most villainous character they have encountered.

So while the school library should ideally stock ALL of Duckbill Publishers’ Hole Books,   or ALL of Puffin’s Ruskin Bond chapter books, my list is like a sampler or tasting menu which introduces children to a variety of stories, narrated in different styles by a range of authors.

Here’s my list of 22 great chapter books perfect for a Grade 3 or Grade 4 Class Library.   Activities are suggested for a few of the books.

The Monster Hunters by Parinita Shetty.  Funny and exciting adventures take place when  Abhay and Nitya choose to go monster-hunting as part of their class project. Several times, they’re sure they’ve found a monster! Have they?  (Fun activities to use for Monster books: Create and name your own monsters/paint monster rocks/create land monsters/sea-monsters/air-monsters.  Create monster chants, monster sounds, monster language.  Design monster clothes.)

The Legend of Captain Crow’s Teeth by Eoin Colfer The follow-up to Colfer’s wonderful The Legend of Spud Murphy, this one has Will and his brother Marty encounter the ‘ghost’ of a wicked pirate. Three more brothers add plenty of humour to the story. (Spoiler alert: A set of phosphorescent rocks make up the strange phenomenon of Captain Crow’s Teeth. As an activity, children could think of different ghostly avatars for the natural landscapes of their city.)

The Secret of the Rainbow Phoenix by Aditi De. A whimsical, fantastical adventure set in the Forest of a Squillion Secrets. Twins Jorkel and Dorkel have to solve riddles to rescue the Rainbow Phoenix who brings light and life to their land. (Getting children to create riddles or share riddles is one fun activity for the classroom).

Emma and the Blue Genie by Cornelia Funke. Emma releases  Karim the Blue Genie from a bottle she finds floating in the ocean. But alas, Karim’s powers have been stolen along with his magic nose ring. Emma and her brave dog Tristan set off on an adventure to help Karim reclaim his powers.

At  Least a Fish, the first in a series by Anushka Ravishanker. Ana wants a dog but her parents buy her fish. Three fish!  While trying to look after her fish, Ana and her best friend Zain encounter a real dragon and solve a mystery.

Bonkers by Natasha Sharma. Armaan thinks his dream has come true when his parents buy him a puppy. But his new pet, Bonkers,  completely lives up to his name. He chews Armaan’s spectacles, resists getting trained and worst of all, and gets Armaan into trouble with the school bully. A charming and funny story of a crazy pet coming to his owner’s rescue.  (Check out Bonkers activities suggested by the author. The book is a great starting point for discussion on how to deal with bullies. Or thinking up ways in which the story would be different if Bonkers was a donkey or any different animal.)

Mercy Watson Fights Crime by  Kate Di Camillo: With minimal  text and large, colour  pictures, on every page, this book is perfect for readers who are just starting on chapter books. It’s a series, so readers who like the Watsons’ pet pig (sorry, ‘porcine wonder’) have several adventures to look forward to. A definite hit for all readers who enjoy humour, animals and buttered toast.

Leroy Saddles Up by  Kate Di Camillo. Reformed thief Leroy (who we met in Mercy Watson) wants to become a cowboy.  He’s already acquired all the necessities—a cowboy hat, boots, lasso. Now he needs to get himself a horse. Which he does. Except that Maybelline, the horse who responds only to poetic compliments, may not be ideal cowboy material. Characters from Mercy Watson appear in this series, helping in the progression from easier to more complex reading material.

Care of Henry by Anne Fine. A heart-warming story about Hugo’s dilemma – he  has to choose who to stay with when his mother has a baby. But Hugo will never go anywhere without his dog Henry. The question then is who is best suited for the Care of Henry.

Mira the Detective by Pavitra Sankaran.  Young Mira solves three mysteries in one book. She finds a missing antique watch, tracks down stolen packets of Mayamix and helps find a missing neighbour.

Maya saves the Day  by Meera Nair.  Maya, a delightfully feisty young girl who  handles  problems very resourcefully.  Be it a tiger in the house, rescuing lost puppies or finding her lost parents – Maya gets to the bottom of each mystery.

Trouble with Magic by Asha Nehemiah. Veena gets her Aunt Malu to use her herbal magic to create powerful potions and cures. But the magic misfires and it’s now up to Veena to rescue her Aunt from trouble. (Create new herbal potions or different shades of herbal paint as an activity. *Create a business plan complete with posters for a herbal product you have created. Thanks to Seema Karanth for *this idea.)

The Chocolate Money Mystery by Alexander McCall Smith. Max and Maddy Twist are called to solve a mystery involving a hilarious combination of  chocolate, bank robbers and rescue dogs. 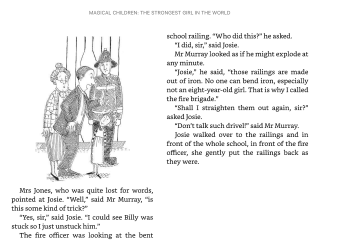 The Strongest Girl in the World by Sally Gardner. Josie Jenkins discovers her super-human strength when she rescues a classmate who has his head stuck between iron railings.  Enter the villain who tricks Josie into a contract that has her travelling all over, performing amazing feats. How does Josie get out of a contract and a life she is fed up of? 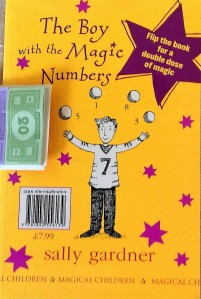 The Boy with the Magic Numbers  by Sally Gardner. Billy  Pickles goes to New York to visit his Father’s family, after his father has abandoned Billy and his mother. He has a magic money box, a gift from his father, that seems quite useless. In New York, Billy has many adventures, makes a new friend, foils a kidnapping and finds a way to help his mother. 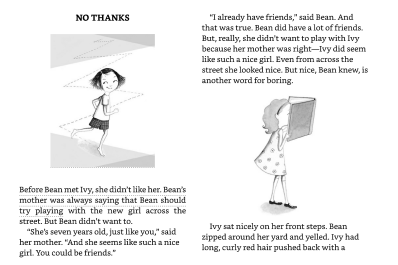 Ivy and Bean by Annie Barrows Start with Book 1 of this wonderful series. Ivy and Bean start off by not liking one another. They think they are too different to ever become friends. But when Bean gets into trouble with her older sister and Ivy shows her a few tricks, the two end up becoming best friends.

Charlie and the Big Birthday Bash by Hilary Mckay. Part of a wonderful series.  Charlie’s big brother Max hates parties and doesn’t want to celebrate his birthday. So Charlie sets out to make Max change his mind by throwing him a party. Everything that can go wrong, does – but does Max finally enjoy the party? (Classroom activities could include planning and holding a surprise party.)

The Aventures of Mooli and the Blue-Legged Alien A Blue-Legged Alien gets in the way of best friends Soups and Mooli wanting to win a prize on Wayouts. (World’s As Yet Original Untried Tricks and Stunts). (Activities: Think of new prize-winning stunts for Wayouts)

Cricket for the Crocodile by Ruskin Bond.   A cricket match between the village boys and the town boys (with some adults added to the team) comes to an unexpected end when Nakoo the crocodile becomes a spectator. (Children could create different scenarios for the match and take turns being Radio or TV commentators describing the match).

When Jiya met Urmila by Shabnam Minwalla.  Jiya and Urmila inhabit different worlds though they live only two banyan trees and one wall away from each other. When the wicked Mr Jajjoo gets videographic evidence of something Jiya wishes she hadn’t done, Urmila and her brother find a way to outwit Mr Jajoo.  The solution involves dogs, cows and lots of fun. (Children could suggest alternate solutions to Jiya’s problem.)

Bookasura by Arundhati Venkatesh When Bala goes to spend the summer at his grandparents home, he encounters a many-headed monster who demands to be fed a steady diet of books. This Bala does till he runs out of books. Can Bala outwit Bookasura and avoid getting eaten up himself. (Kids can have fun deciding alternate strategies Bala could have used to deal with Bookasura. What books could Bala have fed the monster if he had stayed in the home of Celebrity X or Sportsperson Y instead of with his grandparents.)

Hungry to Read by Arthi Sonthalia.   Arjun loves Maths but hates reading. But when his teacher announces a reading competition, and there is a chance that his class could just win an amazing prize, Arjun needs to do his bit to help his class and his best friend. (Children could plan and hold such a competition in school and decide on the most attractive prizes.)

Some of the best activities to promote reading in the classroom are found in this absolutely superb article by reading specialist, Janelle Cox.