It was a moment of pure irony.  Because reading an article titled ‘My Year of No Shopping’, made me rush headlong to –  what  else — shop! For a book. And that too even before I finished reading the article.

In her New York Times article, ‘My Year of No Shopping’ Ann Patchett, (the PEN Faulkner and Orange Prize winning novelist), recommends Barking to the Choir  as a great book to read if you want to see what  true faith in action looks like in this age of mindless consumerism.

Barking to the Choir is, indeed, a gripping read, brimming with warm, humane, thought-provoking and above all profoundly moving anecdotes from author Gregory Boyle’s life. The book describes his journey as he starts and grows one of the largest gang intervention, rehabilitation and re-entry programmes in the USA.  ‘ G’ or ‘G-Dog’ as Greg Boyle is affectionately called, is a Jesuit priest,  a man who believes in the power of boundless compassion (that was the  subtitle  to his first book) as well as in the power of radical kinship (the subtitle to this book). ‘Dog’, in his community’s colloquial use, implies someone who has your back and looks out for you.

When Greg Boyle was assigned to work as the priest at the Dolores Mission Church in Los Angeles, he found that the problem of gang violence was claiming a horrific number of young lives. In 1992, when he founded Homeboy Industries, gang clashes resulted in around 1,000 deaths every year. This figure has plummeted to less than a quarter since then.

Supported by the women in his parish, who were desperate for some solution, Greg Boyle’s program was based on a simple premise. If one has to attract a young person away from a life on the streets, away from the comradeship of the gang, then one has to provide him or her with a job which pays a salary. Since most employers were resistant to hiring these former gang members, Homeboy Industries was started to provide jobs to those with no hope of employment till then.

The community’s attitude was not entirely unexpected.  Many of these gang members were convicted felons just released from prison. Several were burly, tattooed young people donning the kind of look and attitude and that feeds the stereotype of the hardened criminal.  G’s project started with the Homeboy Bakery, then the Homeboy Diner, a printing press and more. The former gang members came to be known as Homeboys or Homegirls (yes, girls are gang members too) and Homies for short. Apart from providing jobs, Homeboy Industries offers a range of other supportive services like tattoo removal, skill-building and training, counselling, de-addiction therapies and even legal services.

The one takeaway that remains etched in my heart and mind is Greg Boyle’s unshakeable belief that, ‘There are no monsters, villains, or bad guys . . . there are only folks who carry unspeakable pain.’

Many of these homies grew up with parents who were addicts or were violent, or depressed.  If that wasn’t bad enough – they were also poor. There are stories in the book which break your heart. Like the one about the 6-year old whose father broke his arm – yes broke – because he took a set of batteries without asking. The 9-year old who was beaten daily by his mother and then left in an orphanage with the words, ‘I found him. I don’t know who he is.’ It took this boy’s grandmother three months to trace him.

The compassion, open-heartedness and humour with which G interacts with the homies, gives us story after story where love overcomes violence, and hope trumps over hatred. But of course, the narrative is punctuated with Greg Boyle’s sadness too.  Their failures are not glossed over and Boyle says he has personally presided at the funerals of over 200 young people he loved, often killed by other young people he loved. But through all of this, the narrative is buoyed by a sense of hope.

A glimpse into the humour of Barking to the Choir

In order to keep hope alive and his work going, Greg Boyle’s modus operandi is to get the community involved, to nudge them gently into offering unconditional support and even love to the homies.   In his experience, ‘Moral outrage doesn’t lead us to solutions–it keeps us from them.’

Starting off as an unknown enterprise constantly scrambling for funds, Homeboy Industries slowly started receiving the patronage of many well-known people. There are warm and humorous accounts about visits from Al Gore, Barack Obama, Diane Lane, Jim Carey and a host of other celebrities.

Though Greg Boyle’s personal faith shines through on every page, this is not a book defined or restricted by religion. It is a book lit by empathy and compassion, humour and tenderness. He makes frequent references to readings and poems that have influenced him, ranging from  Rumi, Hafez and Mary Oliver to the Dalai Lama, Desmond Tutu and Mother Theresa.

One of my favourite stories in the book is a conversation between G and Letty, a homegirl who is desperately trying to rehabilitate herself. Letty, Boyle tells us, ‘has been through the wringer and then back… name any horrific thing that could happen to a human being and it’s befallen her.  Drug addiction, domestic violence, kids taken away … I would not have survived one day in her childhood.’

One day while chatting, Letty surprises Boyle by telling him something completely unexpected. ‘I wish you were God,’ she says.

‘Why do you wish I was God?’ Boyle asks her.

Letty’s reply stuns him with its simplicity, ‘Cause I think you’d let me into heaven.’

Greg Boyle takes a minute to compose himself and then  reaches out to take Letty’s hands into his own, and to and assure her with these words, ‘Letty, I swear to you — if I get to heaven and you’re not there, I’m not staying.’ 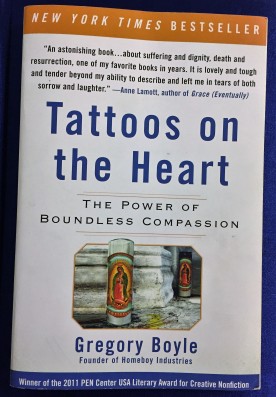 Halfway through Barking to the Choir, I decided I wanted to read Greg Boyle’s first book too, and ordered Tattoos on the Heart. It’s an equally powerful book, and provides more of the back story to the founding and early years of Homeboy Industries.  But if you want to read just one book about the work of Greg Boyle, choose Barking to the Choir.The book offers up-close and empathetic insights into working with young people who have turned to lives of violence and crime. Which makes it an important and useful book for anyone working with children who are marginalized and neglected in different ways.